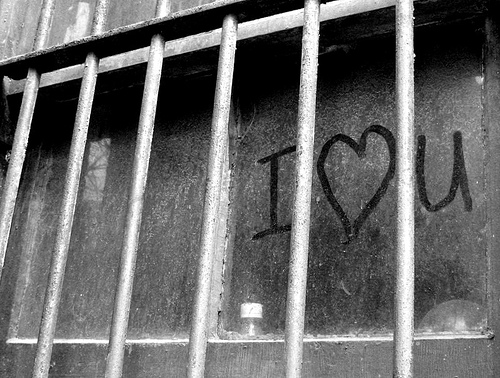 “It was something in his eyes … there was this remorse, sadness. I was attracted. I’m a woman, and I knew he was the one.” –Dagmar Polzin, on her love for death row inmate Bobby Lee Harris

“I’m completely with him, and he’s completely with me. It’s what I was born for, you know. I don’t know what else to say.” –Afton Burton “Star,” on her love for serial killer, Charles Manson

It’s February, and love is in the air. Even behind these hard, cold prison bars. Long before I began evaluating life term inmates (for violence risk) eight years ago, jailhouse romances fascinated me. If you’re like me, you’ve probably wondered: What is it that draws women* to notoriously violent men like Charles Manson, Scott Peterson, and Ted Bundy? Why would anyone date or marry a convicted murderer? Are these relationships real? *I say women, because men are much more likely to be incarcerated and much less likely to begin a relationship with an incarcerated female.

Most often, an inmate becomes involved in or maintains a romantic relationship with someone he knew prior to incarceration or someone who visits the prison regularly. A fair number of the men I evaluate married or dated their wives long before they committed murder. Some have even committed atrocious crimes against their wives (for example, murdering a child) and have remained married. I recently interviewed an inmate serving a lengthy sentence for fatally abusing his child. Part of his parole plan was to reside with his wife, the mother of the deceased child. According to the inmate, she had forgiven him, but as an evaluator I had obvious concerns about the viability of his proposed living arrangements.

Other men initiate and develop romantic relationships during their incarceration, usually through letter writing. There are a number of organizations which encourage volunteers to write to inmates as a means of social support, and not surprisingly, those connections sometimes turn romantic. And online dating…it’s made its way behind bars too. Inmates have friends or family on the outside post their profiles on websites designed to facilitate romantic and social connections between inmates and non-inmates. All too often, in my experience, the women who frequent these sites are older (even elderly) and vulnerable in some way. For example, several inmates I’ve worked with (in their late thirties or forties) have developed relationships with and married women twenty to thirty years older than themselves. Because life term inmates in California are no longer allowed conjugal visits, these marriages are not consummated, and given the age difference, the sexual or physical attraction is dubious. What is clear is that these women play the role of nurturer—sometimes sending money or packages and visiting regularly—to men whose connections with family or friends may be limited. Within the last few years, as the number of illegal cell phones in the institution has risen, more and more inmates are meeting women in chatrooms. Sometimes, the men disclose their location. Other times, they share nothing about their whereabouts or their criminal history. Imagine an unsuspecting female carrying on an intimate online conversation with a murderer in San Quentin.

The reasons women find themselves drawn into these relationships are as varied as the relationships themselves. Women may be better suited to play the caregiving or nurturing role, the role of the rescuer, which may explain why women pursue relationships with male inmates on a more frequent basis than their male counterparts. For some women, these relationships are dysfunctional, clear replicas or reenactments of past trauma. For others, such as Charles Manson’s love, the aptly named, Star, they may have a desire for notoriety just like their better—or worse—halves. That’s not to say there are no healthy relationships in prison. But, they certainly require a different kind of commitment. The ultimate long distance relationship, there is a dearth of physical and emotional comfort to be gleaned from love behind bars, and the future is always uncertain (the men I evaluate have no predetermined release date). In some ways, the emotional and physical space and the predictability afforded by these kinds of relationships may be another selling point. For a woman who finds appeal in the unavailable man, an inmate with a life sentence is the ideal partner.

And then, there are the most complicated, most enigmatic relationships of all…those between an inmate and a professional, such as a correctional officer, therapist, attorney, or staff member. I have evaluated several inmates who have formed long-term romantic relationships with their female attorneys, and I have heard the stories of psychologists like myself being walked off institutional grounds for liaisons with an inmate. Is it love that causes these women to cross the ultimate line? Or is it something else…something darker? For me, these forbidden relationships have always been the most compelling. Maybe that’s why I decided to write about it.

In my upcoming thriller, Daddy Darkest, Dr. Clare Keely finds herself face to face with Clive “Cutthroat” Cullen. Even if they do call him Cutthroat Cullen, he makes her feel safe. He thinks she’s smart. Insightful. Competent. He thinks she gets him like no one else ever has. Sure, she knows it’s risky. She’s already crossing the line. When a series of events leaves Clare desperate for an ally, she’s convinced Cullen is on her side. Or is he? It feels dangerous. It is. She’s living on the edge, but she likes it. Want more of Clive and Clare? I’m offering a special sneak peek at the first three chapters here: http://dl.bookfunnel.com/72rl1n9frx. If you’d like to be one of the first to read the novel for FREE in exchange for an honest review, please drop me a line at ellerykane@outlook.com.