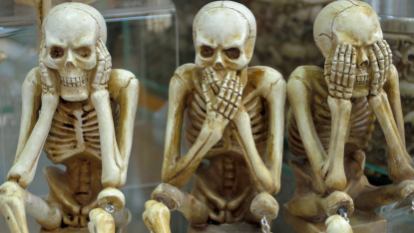 The Skeleton of a Plot

“If a plot is a novel’s skeleton, and characters are the muscle, then theme is its soul.”

Like a forensic anthropologist analyzing human remains for clues, writers piece together a story bit by painstaking bit, taking inspiration from the world around us. A gripping headline; a conversation, overheard; a look exchanged between strangers. These are the bones with which we build the skeleton of a novel.

The bones of my newest book—The First Cut, a tale of love gone wrong—were born from the strangest of places. As a psychologist, I’ve long been a fan of Drs. John and Julie Gottman. You may know them as the couple who can predict which marriages will fail and which will survive based primarily on evidence of The Four Horsemen, four negative behaviors that often arise when we argue with someone we love. Though John Gottman has been married for over thirty years to his wife, Julie, his first two marriages ended in divorce. Contemplating that irony, the author in me imagined two famous “love doctors” who were total failures in love themselves. So much so, they both ended up dead, brutally murdered on Valentine’s Day.

And then, there was the disturbing story of billionaire Barry Sherman and his wife, Honey. One of Canada’s richest men, Sherman and his wife were found dead in their lavish home in December 2017. Police initially investigated the case as a murder-suicide, believing that Sherman hung his wife and then took his own life by hanging himself with a belt. One month later, investigators made a drastic turnaround calling the crime a vicious and targeted double homicide.  And the author in me imagined the murder of a couple which looks one way at first glance but turns out to be much, much more.

In September 2017, I visited one of the most beautiful places in California and possibly the world: Pebble Beach and picturesque Carmel. If you’ve ever been to Carmel, you’ll recall the cobblestone streets and the quaint storybook houses which rise up in the fog like something from a fairytale. Near the famed Pebble Beach golf course is Seventeen Mile Drive, a scenic road which winds around the ocean cliffs and passes through exclusive community of Pebble Beach. Right now, if you’ve saved a little pocket change, you can own Villa Eden Del Mar, a home on Seventeen Mile Drive, for the bargain price of 37 million dollars. There—in scenic Carmel—I found the setting for my story. And the author in me imagined the stark brutality of a double murder against the backdrop of such a beautiful place, the dark secrets which might lie behind the perfect facades of those Pebble Beach homes.

So, the bare bones of my story took shape and that skeleton rattled to life in The First Cut, the latest book in my Doctors of Darkness series, which is available for preorder NOW and scheduled for release on January 8, 2019.