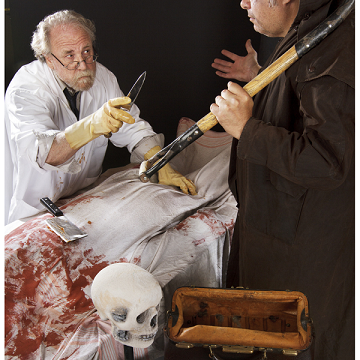 “I will follow that system of regimen which, according to my ability and judgment, I consider for the benefit of my patients, and abstain from whatever is deleterious and mischievous.”

“It turns out crazy people shouldn’t be shrinks.”

Doctors care about their patients. Doctors are competent and helpful. Doctors save lives or improve the lives of their patients. These tenets form the pillars of the helping professions, and most of us are taught as children to accept doctors’ advice or intervention without question. I remember the first time I was able to call myself doctor. I quickly realized that weighty word opens doors, shuts mouths, and gets things done. And of course, most doctors do care, are competent and helpful, and do provide effective treatment for their patients. But, what about those doctors who do just the opposite? Those doctors who cause harm. The real life doctors of darkness.

Hannibal Lecter was the ultimate fictional dark doctor, accepted to Johns Hopkins Medical School shortly after committing his first murders. But, real life offers no shortage of evil. Consider Georgia psychiatrist, Narendra Nagareddy, age fifty seven, also known as “Dr. Death.” Nagareddy was arrested in March 2016 after nearly forty of his patients died, twelve of whom passed away due to overdose on prescription opiates and benzodiazepines which had been routinely overprescribed by Nagareddy. And then there was Dr. Grant Robicheaux, who appeared on a Bravo reality television show in 2014. Robicheaux, a handsome orthopedic surgeon, and his girlfriend, Cerissa Riley, now face multiple charges related to the drugging and sexual assault of two women, and authorities suspect there may be many more victims. A list of dark doctors would be incomplete without mention of Larry Nassar, the team physician for USA Gymnastics, whose current sexual abuse victim count stands at 265 young women.

But M.D.s have not cornered the market on darkness. Look no further than the Psych Crime Database website, for example, which provides a list of psychologists and counselors who have committed such serious harm against their patients they have been the subject of criminal or administrative action. Crimes range from sexual assault and child sexual abuse, to Medicare fraud, to terrorism, to even making death threats against one’s own patients. One such psychologist worked in the California state prison system before faking her own rape and robbery in an effort to persuade her husband to move out of their Sacramento neighborhood. Another psychologist faked a sexual assault to cover an extramarital affair. And the list of psychologists who take sexual advantage of their vulnerable patients is numerous.

As a psychologist myself, reading these accounts makes my stomach turn but I am not surprised. Many who enter the helping professions do so because of their own experiences of past trauma, mental illness, substance use, or problems in their families of origin. In some ways, this may uniquely qualify an individual to relate to her (or his) patients, but in other ways, it may leave a professional vulnerable to coping in maladaptive ways, particularly if she (or he) has not yet dealt effectively with her (or his) own issues or has poor boundaries. Second, the position of a doctor is by its very nature a relationship of trust which affords potentially nefarious individuals the unique opportunity to commit harm undetected or with less chance of being reported or caught. And finally, doctors are human beings, as complex and deeply flawed as anyone else. Perhaps the fault lies in assuming otherwise.

To avoid finding oneself in the “care” of a dark doctor, do your homework. Talk to other patients or clients who have been treated by the doctor or look at online reviews. Check state board or licensing websites for complaints and ask your doctor if he (or she) has ever had any complaints lodged against him (or her). Trust your instincts, speak up, and don’t be afraid to get outta Dodge if your doctor does something that makes you uncomfortable. And most importantly, check your hero worship at the door.

Remember: Some doctors earned their degrees from the dark side.